Almond Valley Heritage Trust in Livingston is set to open a new, all-weather play space with the unusual theme of a shale oil refinery just in time for the summer holidays on Wednesday 26 June. Paraffin Works will explore aspects of West Lothian’s heritage in the shale oil industry through an immersive and interactive play experience.

The three storey, undercover facility is located in Almond Valley’s Charlesfield area with further additions and features to be added later this year. The unusual outdoor play area will immerse children in the industrial world of stills, tanks and retorts that accurately reflect the buildings and structures of West Lothian’s historic shale oil industry. Alongside their families children can explore the passageways and pipelines of a traditional oil works and, through active and imaginative forms of play, gain insight into an industry that once shaped life in most rural parts of the country.

The Scottish Shale oil industry developed from James ‘Paraffin’ Young’s pioneering experiments of the 1850’s, and continued in operation until 1962. Shale rock, mined from beneath the fields of West Lothian, was processed to release crude oil that was then refined to produce paraffin, candle wax and many other oil products. The waste rock from this process was heaped to form the distinctive pink ‘bings’ that remain an iconic feature of the local landscape. In its peak, the industry employed a workforce of over 12,000 at more than a dozen major works which were in operation.

Almond Valley holds the archives of the old shale oil companies and a museum collection that is recognised as being of national significance. The story of the industry is told in the museum and online web resource.

"We've tried to create an industrial landscape of pipes, tanks, and furnaces, that kids can safely explore and imagine themselves as workers in a Victorian shale oil refinery. This great adventure is very far from a traditional playground, and we've tried to keep things as faithful to the original as practical. This has only been possible by doing much of the design and construction work ourselves, with the technical team at Almond Valley developing many new skills in the process. We plan to add further features to the Paraffin Works in the future."

‘The new play-space provides a really fun way of introducing local children to the very special industrial heritage of West Lothian. It has already a huge amount of interest and will encourage many more people to visit Almond Valley.’

The project was made possible with funding from the LEADER European grant programme which delivers support for communities and business in rural areas, who contributed 50% of the £350,000 cost of the project.

‘So much of the rural landscape and settlements of West Lothian were shaped by the shale oil industry. This innovative new facility celebrates local community heritage and it is hoped that the project will encourage further development within rural areas. The new Paraffin Works will provide economic benefits through promoting tourism to the area and aims to enhance local identity.’ 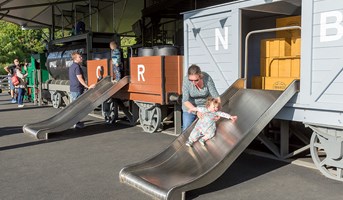 Video of the Attraction