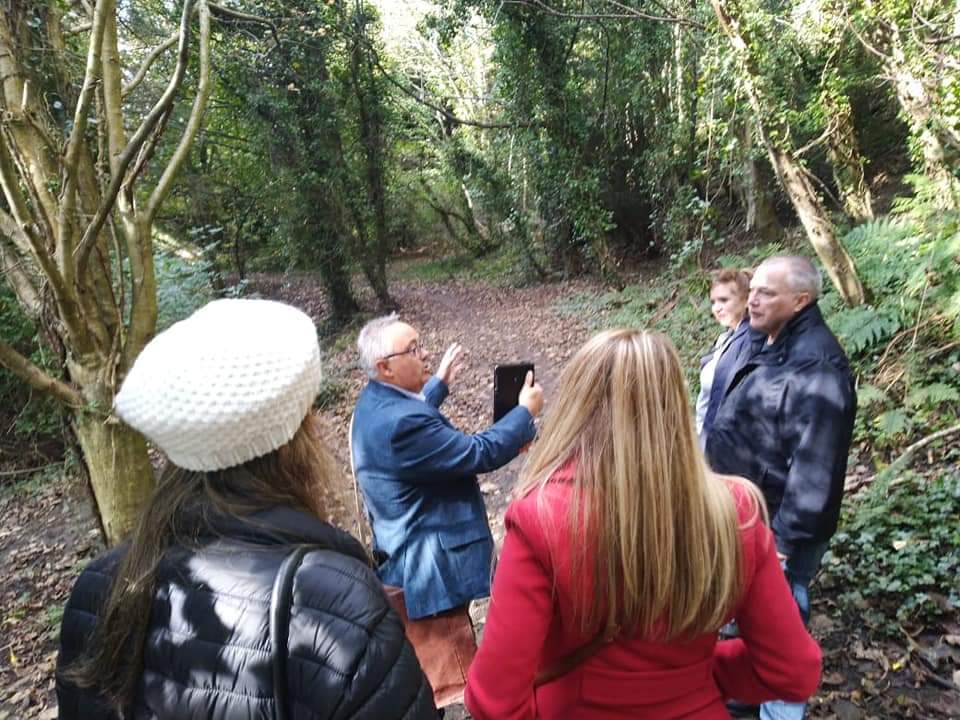 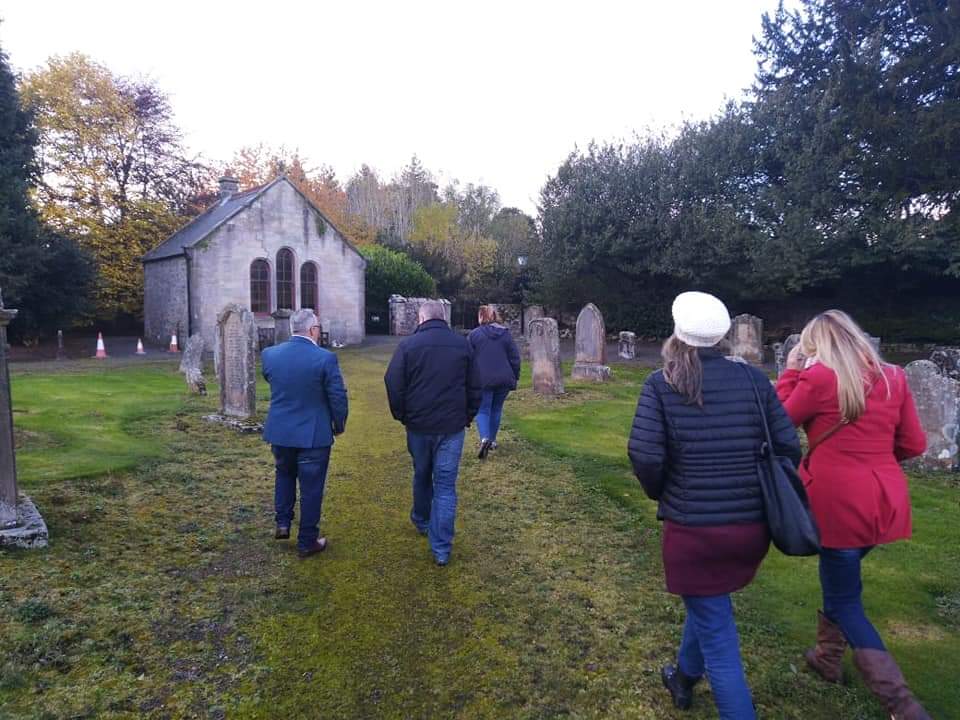 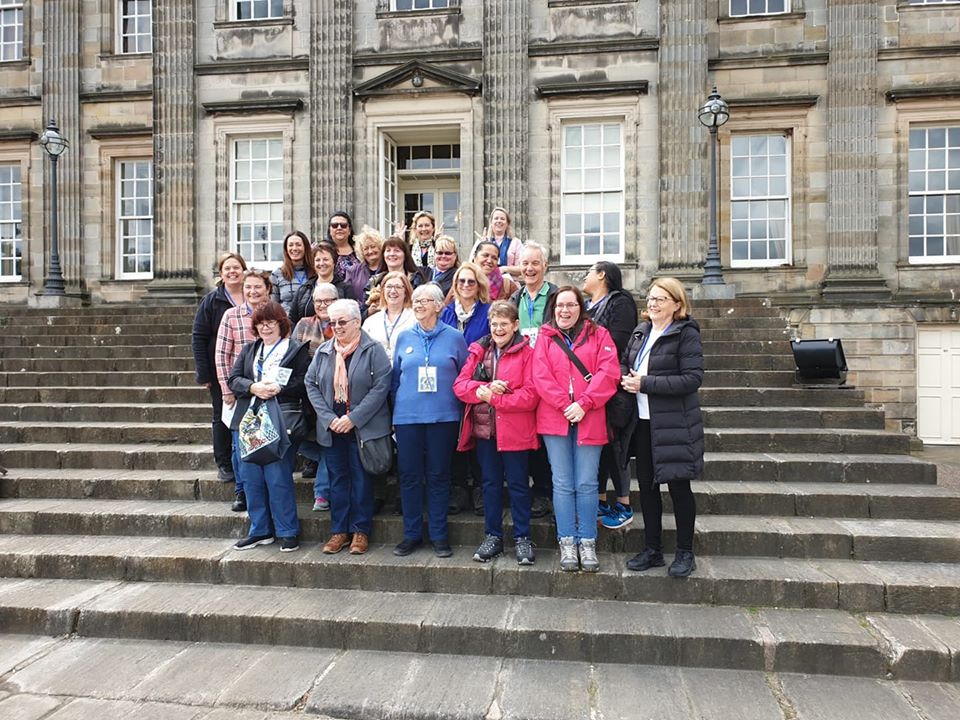 We are so close to many fantastic Outlander filming locations and being only a short walk from "Lallybroch" makes us the perfect spot to start your Outlander adventure.

We offer a walking tour each Sunday so you can explore in detail, Hopetoun House and grounds, Abercorn Church and Midhope Castle during the summer months. Our private day tours by car to explore further afield and are available all year. (We are happy to pick you up from your West Lothian accommodation).

We will pick you up from you're accommodation after breakfast and head to South Queensferry where you will get an amazing view of the Forth Rail Bridge (UNSCO world heritage site). We will travel along the High Street making our way to Hopetoun Estate and Abercorn Church. This is the final resting place of Frank Randell. Spend some time here to look at the gravestones and you will find some amazing works of art spanning around 500 years and a wee visit to the museum at the gate is necessary.

It is then just a short drive to Midhope Castle, Lallybroch the home of Jamie Fraser. Remember to view the doocot on the way up to the castle and take a walk along the river by the car park where you will find the entrance to “Red Jamie’s” cave. It was also along this path that poor Fergus lost his hand to the redcoats. The small section of woods that looks like an island from the car park is where Jamie watched all the goings on at Lallybroch from a safe distance.

Then we travel to Blackness Castle, this is Frank Randell’s redcoat garrison at “Fork William” it is also an amazing real castle! We will see where Jamie rescues Clair and jumps into the sea loch and have fantastic views along the river Forth.

Linlithgow Palace is our next stop. You will find the lovely small town of Linlithgow and a great big palace right in the middle! Mary Queen of Scots was born here, and it was the entrance to Wentworth Prison in Outlander. To think this palace was built so long ago just takes your breath away. You will have around an hour to visit the town (to do a bit of shopping or have some lunch) then we will make our way to Hopetoun House. Hopetoun House is a large stately home. It has been a generous location, providing scenery for seasons 1, 2, 3 and 4. (Fans of Sam Heughan may also be aware that it has appeared in photographs used to promote Barbour). The red drawing room is where Claire meets the duke to request Jamie’s pardon. The yellow drawing room may be recognisable as the room where Jamie talks with Lord Dunsany at the start of his time in Helwater? Upstairs there were two bedrooms used in season 2, Claire and Jamie’s guest room in Paris (with the green bed) where Mary Hawkins recuperates from her rape, and Mary’s bedroom at her Uncle Silas’s home. Outside we find the area used for the dual with the McDonalds. How the back has been used to represent the Duke of Sandringham’s home, while the front is recognisable as Ellesmere. There is a courtyard used as the entrance to the Paris brothel, Maison Elise and the alleyway where a number of Paris Street scenes were filmed, including the infamous rape of Mary Hawkins. Interestingly, the same alley was used as the Helwater stables in episode 4 of season 3. The same alleyway is also used, in ‘Useful Occupations and Deceptions’, when Jamie chases Fergus from the brothel after seeing him stealing from the guests. The chase continues out onto the back wall of the house. We will also roam the grounds finding even more interesting locations as well as learning much more “real” history of a great Scottish house. When we leave Hopetoun we make our way to Culross in Fife.

The lovely town of Culross is best remembered as being used as Cranesmuir. The Mercat Cross is where we find Geillis Duncan’s house and the historically picturesque town square where Geillis is sentenced to burn for being a witch. It is also here that Jamie and Claire rescue the thief, Tammas, when his ear is pinned to the post. The area was also used in ‘Down the Rabbit Hole’, involving Bree, Laoghaire and Joanie, when Laoghaire rescues Bree from the cold, then later discovers that she is Jamie’s daughter (a notable deviation from the book). Laoghaire’s home, Balriggan Cottage, can be seen, on Little Causeway. The interior shots were filmed at the nearby Culross Palace.

Culross Palace, one of my favourite Outlander locations and was built between 1597 and 1611 by Sir George Bruce, the Laird of Carnock. Although never an official royal residence, it was visited by King James VI in 1617. Appearing in seasons 1, 2 and 4, its rooms, courtyard and gardens have been used to significant effect in many scenes. It is first seen in season 1 when the palace gardens are used as the herb garden at Castle Leoch. Not long after that we then get to see the palace withdrawing room doubling as Geillis Duncan’s parlour. Arriving at the palace it is immediately recognisable as having been used for the Jacobite encampment in season 2. It is not difficult to picture the hustle and bustle, while Claire works pulling teeth and Murtagh waits on Jamie who is meeting with the prince. The Palace High Hall was used for the Jacobite meeting where Jamie swears his oath to Prince Charlie. The Palace’s Kings Room was used for a bedroom scene when Jamie and Claire’s visit a village. The Palace’s Kitchen and Pantry was used as a tavern. The palace rooms also played the inside of Laoghaire’s home where Bree watched as she and Ian argued about Jamie’s money.

The West Kirk, near Culross, is the site of the Benedictine abbey, the Black Kirk. In “The Way Out” the Black Kirk is blamed for Tammas Baxter’s illness, the villagers believing him to be possessed after visiting the kirk. Jamie takes Claire to the site of the Black Kirk. While there he explains how young boys would visit the kirk as a dare, and sometimes eat berries and wood garlic. Claire realises that the wood garlic is lilly of the valley, the cause of Tammas’s illness. It is a wee walk up the hill to the kirk but well worth in. The Culross West Kirk was built in the early 1500s and it was the official place of worship for Culross until 1633.

If you like you could have supper in the village pub.

We will try to find a wee “standing stone” for you on the way back to your accommodation and have time to visit Aberdour. Please remember this is your day and we can change the route if you wish to include Falkland (Old Inverness) or Doune Castle. Just let us know on the day. We will do as much as we can! 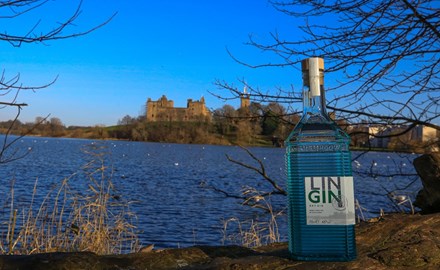 Join us for a tour of our craft Distillery and learn how we make LinGin and the Four Marys. You will be able to sip a LinGin perfect serve G&T at the start of the tour (Drivers will get a 0% Alcohol cocktail) and will then get to try five of our gins at the end, or if you are driving we will send you away with perfect serve to enjoy at home. You will also enjoy a 10% discount off all bottles and merchandise. Please ensure you arrive on time and bring a face mask with you. We will provide our own hand sanitiser for you to use on entry and leaving the Distillery. As a small family business we don't have dedicated tour staff so our tours are available at different times due to availability. Please check on Eventbrite for available times. Cost is £20 per person or £7 for a driver. The tour will take approximately 90 minutes. If you have a Voucher please contact us to book. 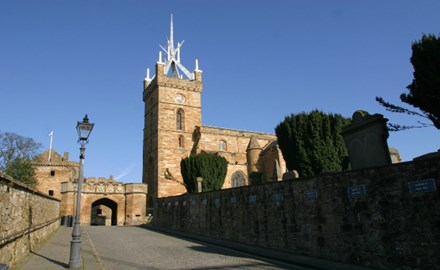 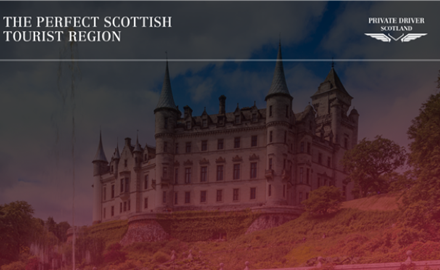 Private Driver Scotland is a luxury tour operator based at Edinburgh airport. They offer tours within West Lothian.