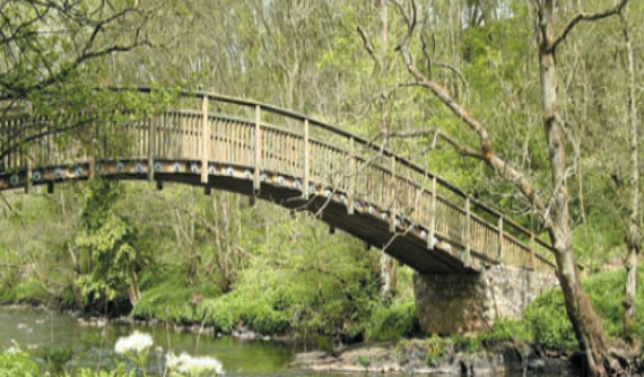 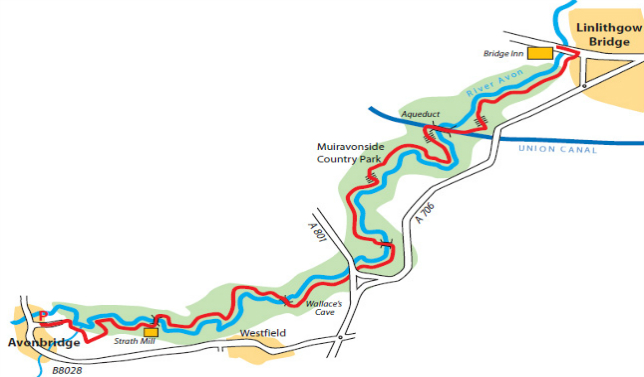 A fascinating walk with historic points of interest along the way. See where William Wallace hid from the army of Edward I in the 13th century. Distance: 9.5 mls / 15kms

From the centre of Avonbridge, walk along Bridgend Road until you see the River Avon Heritage Trail signpost. Follow the track eastwards.  After you reach some cottages turn right at the first trail marker, cross the bridge and head up to a farm until you see the next marker. Follow the trail along the riverbank, cross the river at the first stone bridge by the old Strath Mill and pick up the trail a few yards further up on the other side.

Further on, marvel at the Westfield viaduct as you climb up and pass under one of its arches.  Crossing a metal footbridge, stop at Wallace’s cave, where William Wallace hid from the army of Edward I after the Battle of Falkirk in 1298.  The trail now winds through woodland at ‘The Desert’.  Walking under Torphichen Bridge you will see the ruins of a cottage where Henry Bell, who invented the first steamship ‘Comet’, was born.

Further on, after crossing the Carriber Bridge, you reach Muiravonside Country Park and then up many steps to cross the Avon Viaduct.  After a few yards turn left down more steps to meet the river again.  Follow the trail to the end, turn right and head for the main road in Linlithgow Bridge where you will take a left turn along to the Bridge Inn.

Bridgend Road
Avonbridge
off B8028 This walk takes in some of the best views in West Lothian including Linlithgow Palace. Distance: 8.5 mls / 13.5 kms

The ‘Shale Trail’ is a new route through West Lothian’s industrial past.